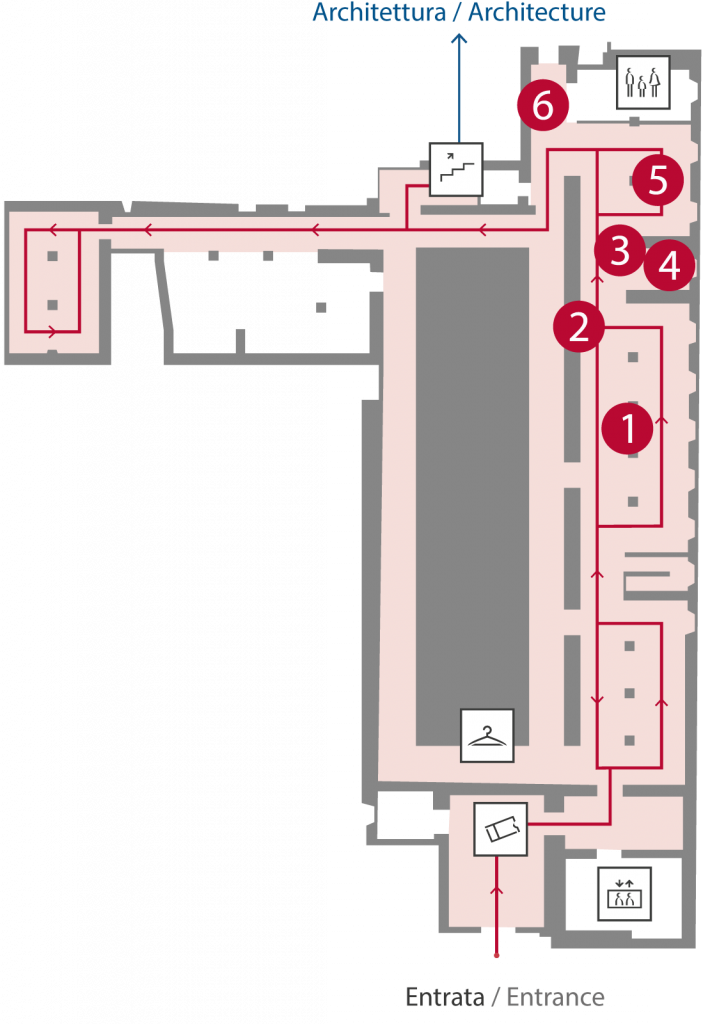 The tour begins in the exhibition rooms, where the six-hundred-year history of the hospital is told from its origins through artefacts and works of art, including portraits of illustrious figures1 who contributed to the foundation and development of the institution.

The protagonists of the story are the “nocentini”, the girls and boys of various ages who were welcomed by the Hospital. We can see them portrayed in daily activities in the Massacre of the Innocents2, or hidden under the great cloak of the Our Lady of the Innocents3: the babies still in swaddling clothes are supported by children wearing white tunics, while the older ones, dressed in black, have the image of the putto in swaddling clothes sewn on their tunic, indicating that they belong to the great family of the Innocents.

The girls and boys left at the hospital were laid in the Pila, a sort of holy water stoup, initially placed outside in the loggia of the façade and, later, inside, in correspondence with a small window that communicated with the entrance loggia.

The care with which each child was welcomed can be seen in the terracotta Nativity scene4: the babies left at the hospital were placed between the figures of Mary and Joseph, symbolically taking the place of the Baby Jesus.

One of the most touching rooms in the museum is the so-called “signs” room, which stands out for its striking display of one hundred and forty pull-out drawers5 containing small objects. These identification “signs” or “signals”, hidden in the swaddling clothes of newborn babies when they were abandoned, often consisted of broken or split objects: recomposing them would prove the belonging of the child if the family of origin could one day take him or her back.

The Historical Archives of the Innocenti preserve thousands of “signs”, some of which are exhibited in the section of the Museum dedicated to the Archives6. The latter preserves the memory of the Institute with a vast documentation on the children, the nannies and life in the community of the Spedale. The registers document the events concerning the young guests, the building and artistic commissions, the administration and the economies integrated with those of the city.