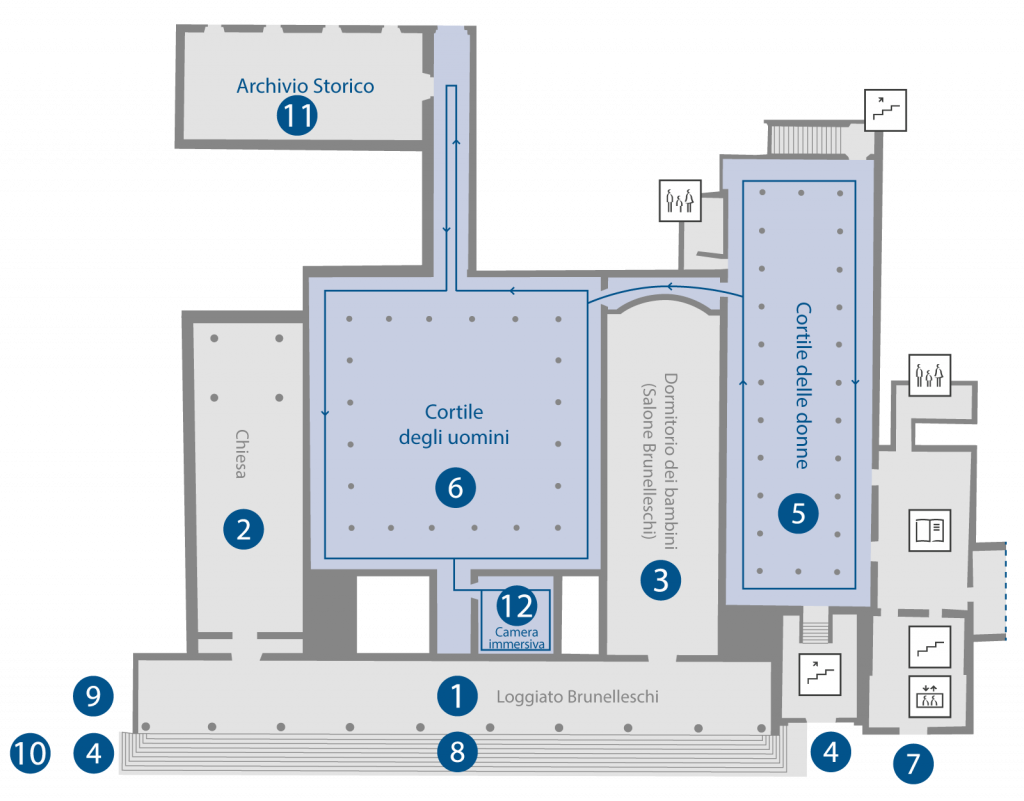 The route allows you to discover the imposing monumental complex: starting from the loggia at the front, you can then admire the Men’s Courtyard and the Women’s Courtyard, for centuries the living places of the “nocentini”.

These spaces, renowned for their beauty, have always represented the heart of the institution and are now experienced on a daily basis by hundreds of children who attend the educational services offered by the Istituto degli Innocenti.

The project of Brunelleschi

In 1419, the Arte della Seta commissioned Filippo Brunelleschi, a tireless and multifaceted genius known for his great inventive and design skills, to build the hospital. Brunelleschi – the inventor of linear perspective – was responsible for innovative architecture such as the dome of Santa Maria del Fiore, which made Florence the cradle of the Renaissance.

Brunelleschi was inspired by classical art to develop a new language that took shape for the first time in the Hospital building: columns, capitals, arches and vaults make up a rational and airy structure using pietra serena and plaster, anticipating the recovery of classical architectural elements that was to become distinctive of Florentine Renaissance architecture.

The innovation is also represented by the design of a building created specifically to welcome children:

“Brunelleschi created a space in which he intertwined his nostalgia with the natural charm of childhood, and childhood is rendered through what is its most authentic and mysterious language: play. The idea of play is taken to the limits of evanescence where it touches the regions of myth. It should be noted that Brunelleschi was constructing a building for a suffering childhood: but this dimension is totally forgotten

[…] the space is composed as the game is invented: from the very beginning, Brunelleschi wanted to celebrate the end of sickness and misery with the game, to celebrate a victory in what was to be their home”.

The playfulness Michelucci alludes to refers to Brunelleschi’s use of the square and cubic module to clearly and reassuringly mark out spaces. This module was used both in the courtyards and in the façade, with the large loggia connecting the interior of the Hospital to the open space of the city, creating the conditions for the formation of the future Piazza Santissima Annunziata.

Filippo Brunelleschi directed the construction of the Hospital between 1419 and 1427, building the external porch1, the church2 and the children’s dormitory3 – known today as the Salone Brunelleschi – the heads of the porch4 and the basement.

He designed, but did not build, the marvellous Courtyard of Men.

Work on the factory of the Innocenti resumed in 1436 under the direction of Francesco della Luna, who replaced Brunelleschi in the management of the site. This period saw the construction of the Women’s Courtyard5 with its colonnaded loggia above the cross bays, the covered gallery above the external porch, the Men’s Courtyard6 and a second header7 to the right of the external porch.

The new extensions on the façade, the gallery and the second header on the right, break the symmetry and balance of the part of the building designed by Brunelleschi.

Between 1445 and 1500: the staircase leading to the porch8 and the rooms above the Men’s courtyard were completed, the Putti in swaddling clothes by Andrea della Robbia were positioned in the oculi, the large drying room of the Verone was constructed, the vaulted entrance on what is now Via della Colonna9 was created, the shift of the old header10 to the left was realized and  the church bell tower was completed.

The Historical Archive11 is located on the ground floor. Since 2019, on the occasion of the 600th anniversary of its foundation, the Institute has made its prestigious spaces visible to visitors through a glass window at its entrance.

The immersive chamber12 is currently located in Sala Grazzini, on the ground floor of the Institute.

Visitors can now “immerse themselves” in the Hospital’s history: the story of its constantly evolving places and its constant commitment to protecting children is illustrated through a 270° projection, narrated by actors who give voice to the great protagonist of its origins, Filippo Brunelleschi, in dialogue with a young girl of our times who questions him about the past, present and future of the historic institution.